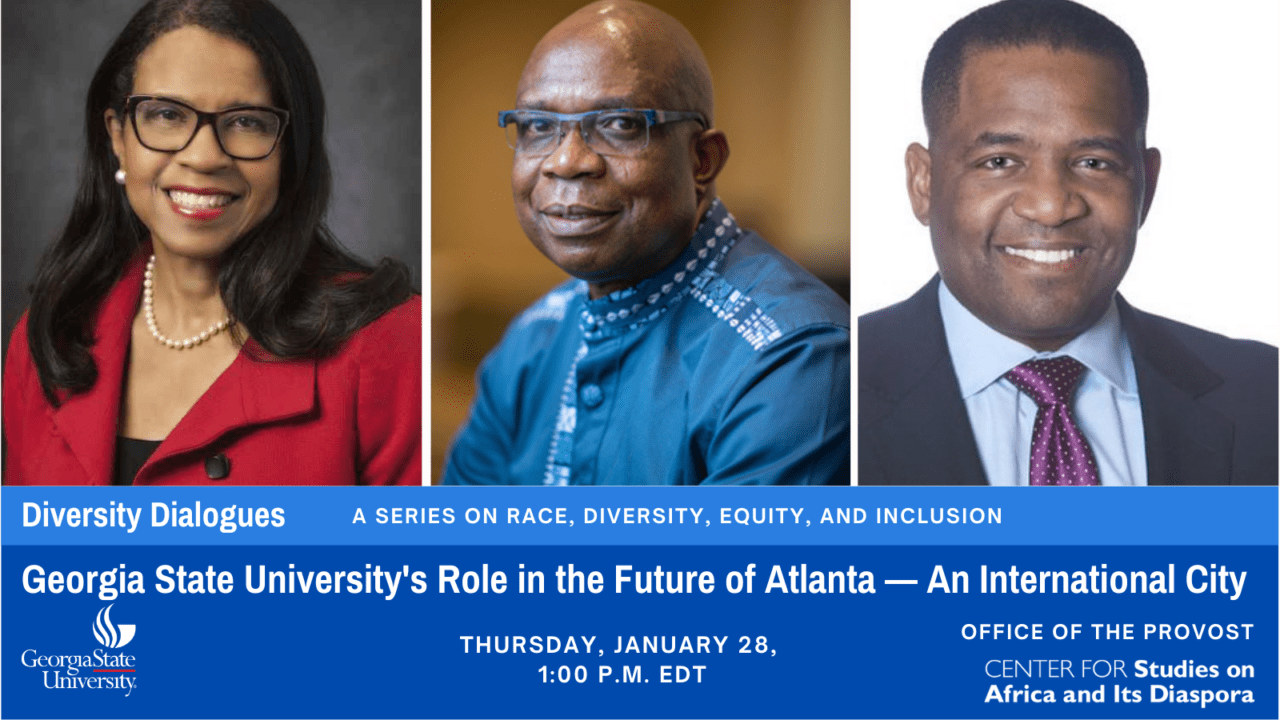 On, January 28, 2021, CSAD co-sponsored the Diversity Dialogue series “Georgia State University's Role in the Future of Atlanta - An International City,” in partnership with the Office of the Provost. The fourth dialogue of the Diversity Dialogue series continued its discussion on race, diversity, equity, inclusion, social justice, and the Georgia State community. This series examined Georgia State’s role in the future of Atlanta as an international city through a discussion of civil and human rights in Atlanta (and Georgia State) – past, present, and future. Dr. Maurice Hobson, CSAD’s Advisory Board’s Vice Chair and Associate Professor of African American Studies at Georgia State University, served as the moderator. Panelists included Andrea Young, Executive Director of American Civil Liberties Union of Georgia, Ceasar C. Mitchell, Jr., Partner at Dentons, and Dr. Collins Airhihenbuwa, Professor of Health Management & Policy, Global Research Against Non-communicable Disease (GRAND) at Georgia State University School of Public Health.

Andrea Young is the executive director of the American Civil Liberties Union of Georgia. She is a life-long advocate for civil and human rights. Young served as an Adjunct Professor at the Andrew Young School of Policy Studies at Georgia State University and executive director at the Andrew J. Young Foundation. She served as Vice President for External Affairs for Planned Parenthood of Metropolitan Washington, defending a woman’s right to reproductive healthcare. As Vice President of the National Black Child Development Institute, Young led a school readiness initiative that increased local investments in early care and education and led to a commitment to universal pre-kindergarten in Washington, DC. She is also the author of Life Lessons My Mother Taught Me, co-author of Andrew Young and the Making of Modern Atlanta and collaborated with former Atlanta Mayor Andrew Young in writing, editing, and researching An Easy Burden: Civil Rights and the Transformation of America.  She has been recognized nationally for her work as an advocate for civil and human rights.

Ceasar C. Mitchell, Jr. is a partner at Dentons, a multinational law firm driven to provide a competitive edge in an increasingly complex and interconnected marketplace. Mitchell is a member of the Public Policy team and head of the firm’s interdisciplinary Local Government Solutions practice, a service that bridges the public and private sectors to meet the challenges facing US local and state governments. He served as the president of the Atlanta City Council and is deeply engaged in the Atlanta community and beyond. Mitchell serves on the advisory boards for Hands on Atlanta and Midtown Alliance. He is a board director for Points of Light, Inc. and previously served on the governing boards of the Atlanta Regional Commission and Georgia Municipal Association, and a nationwide taskforce of the National League of Cities to address the opioid crisis in American cities. In his capacities as a lawyer, elected official and civic leader, Mitchell has been named one of Atlanta’s 100 most influential citizens.

Dr. Collins Airhihenbuwa leads the interdisciplinary team known as the Global Research Against Non-communicable Disease (GRAND) Initiative at the School of Public Health at Georgia State University. He is also a Professor of Health Management & Policy. Dr. Airhihenbuwa is an expert in creating solutions to promote health equity in national and global health and has more than 30 years of experience advancing research on culture, identity, and health to inform strategies for training young professionals to conduct health behavior and public health research and intervention. Prior to joining the school, he was dean of the College for Public Health and Social Justice at Saint Louis University in Missouri and authored a cultural model (PEN-3) that is used in several countries to develop programs and interventions to address health inequity. He also has served as a visiting scholar to UN agencies such as the World Health Organization and major universities and has served on boards of Saint Louis City and Hospitals, the National Advisory committee of the Robert Wood Johnson Foundation Health Policy Scholars, the Global Philanthropy Alliance, and the board of Scientific Counselors for the Centers for Disease Control and Prevention.

Send this to a friend