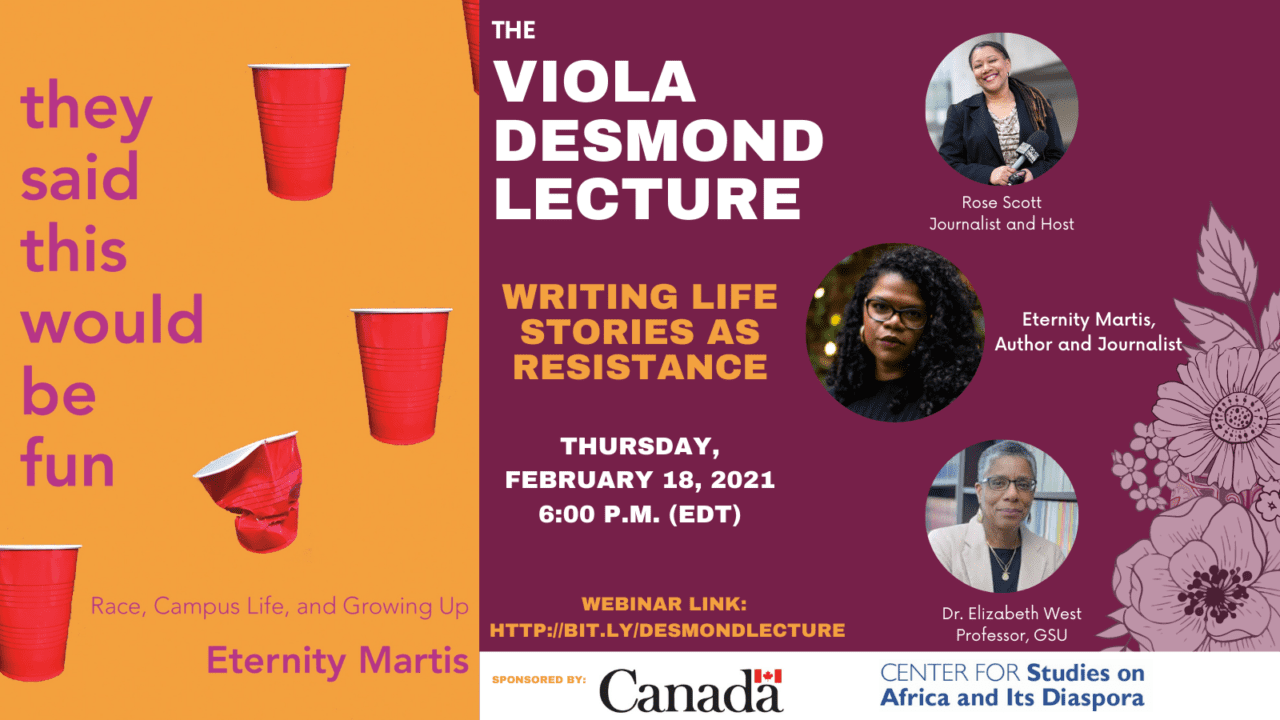 The Consulate General of Canada in Atlanta, in partnership with the Center for Studies on Africa and Its Diaspora,  presents the 2021 Black History Month virtual event, The Viola Desmond Lecture Series: "Writing Life Stories as Resistance on Thursday, February 18, 2021 at 6:00 p.m. (EDT).

The Viola Desmond Lecture Series commemorates and celebrates the life and activism of Viola Desmond, an African Canadian businesswoman who resisted discrimination and inequitable treatment at a local movie theater. Desmond's case served as a catalyst to legally end segregation in Nova Scotia, and she became the first Canadian woman to be featured independently on a bank note. Additionally, Desmond is heralded as Canadian’s peer to America’s Rosa Parks and has been attributed various accolades for her role in asserting civil rights in Canada. This Black History Month discussion aims to explore links between Black Americans and Black Canadians, to bring awareness to issues related to racism and misogynoir, and to encourage Black, Indigenous, People of Color, and women to tell their stories. This marks the Consulate’s Third Annual Viola Desmond Lecture.

This year's Lecture features author and Toronto-based journalist, Eternity Martis. Eternity Martis is an award-winning Toronto-based journalist. Her reporting on gender and race has appeared in Vice, Huffington Post, The Walrus, CBC, Hazlitt, The Fader, Salon, and on academic syllabuses around the world. Her work on race and language has influenced media style guide changes across the country. She is the course developer and instructor of “Reporting On Race: The Black Community in the Media” at Ryerson University, the first of its kind in Canada, an adjunct professor in the Gender, Race, Sexuality and Social Justice at UBC and the 2021 Journalist-in-Residence at UBC. In 2020, she was named one of Canada's Top 100 Most Powerful Women by Women's Executive Network.

Her debut memoir, They Said This Would Be Fun, was an instant bestseller. CBC named Eternity one of "Six Canadian writers of Black heritage to watch in 2020" and PopSugar named the book one of "5 Books About Race on College Campuses Every Student Should Read." It is an Apple, Audible and Chapters/Indigo's pick for "Best Books of 2020." Recently, it became a finalist for the International Book Awards in the categories of Autobiography/Memoir and Social Change.

The 2021Viola Desmond Lecture will be moderated by Rose Scott, award-winning journalist and host of WABE 90.1 FM,’s, the Atlanta National Public Radio affiliate, Closer Look. Scott will host a discussion with Eternity Martis and Dr. Elizabeth West, Professor of Africana Literatures and English at Georgia State University and the Director of Academics for the College of Arts and Science’s Center for Studies on Africa and Its Diaspora (CSAD). Welcome and closing remarks will be given by Dr. Jennie Ward-Robinson, Director of Operations and Outreach of CSAD, General Kirk Duguid, Acting Consul of The Consulate General of Canada, and Dr. Maurice J. Hobson, Associate Professor of African American Studies at Georgia State University and Vice Chair of the Scholarship and Advisory Board for CSAD.

Send this to a friend